The Island of Vis – Military Base and Key to The Adriatic

sightseeing of the most important historical sites; tour of the former military tunnels; labyrinth of underground tunnels; RAF’s airport from the 1944, Tito’s cave, peak of Hum, visit the forts and fortresses and Archaeological Museum

The island of Vis is an island of beauty and rich history. Vis is the island of the Illyrians, Greeks and Romans.

It was under the power of the Venetians, Austrians and Hungarians, as well as the English and French. The most prominent generals and commanders walked the island of Vis, the Allied forces landed their planes there, and naval battles took place there. Vis was strategically important. When under the control of England it was known as the key to the Adriatic, as the Adriatic Gibraltar, and most commonly as little Malta. Because of its military functions during the second part of the 20th century, it was commercially isolated with only modestly developed tourist, agricultural and economic activity.

Vis is recognized as one of the most fortified islands and its role as a strategically important location is reflected in the numerous forts, underground tunnels and military bases. Find out why, throughout history, many militaries fought for control over Vis, and with the help of professional guides explore this mysterious island.

The programme of activities for a 3-day package includes:

The package can be booked from February to late November for groups of 6 to 16 persons.

Available accommodation in 3, 4 and 5-star houses and apartments, and van / jeep transport is available.

Professional guidance is available in Croatian and English languages, and in other languages on request.

All information is of a general character and is not binding; therefore, a request for a final offer is required. 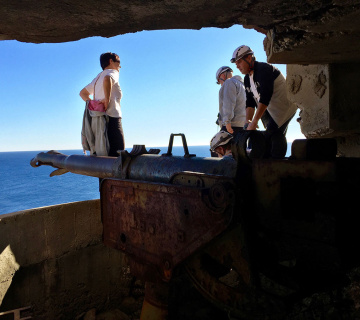